The Cabin Before and After

This weekend I was thinking about how far we've come with the cabin renovation and began looking at some pictures that were taken the first time we saw it.  That was back in 2015 and we closed on the property in December 2016.  We have come so far, and it feels good to have so much behind us.  We still have some repair work and painting to do on the exterior, but the inside is finished, and we are so happy with how things are coming along.  I haven't shared many of the before and after pictures with you so I thought I would.  I must admit I cringed a time or two as I was looking back...it was so bad! 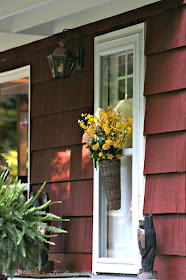 The cabin was vacant for many years and it was filthy, inside and out.  There was old cable, phone and who knows what all the other lines were that ran up the sides and down the back and extra wires that were wrapped in bundles all along the upper porch.  All kinds of "garden art" from benches, to multi-painted birdbaths, posts and poles and all kinds of things that to us didn't have a name.  Old doors that weren't installed correctly, storm doors that were about to fall off, half of the gutters had fallen off, the lower porch posts were not supporting the upper porch, the front porch was pulling away from the cabin and covered with blackish carpet that was loose and filthy dirty.  Hornets, mud dauber and every other kind of nest and web in every nook and cranny...it was awful! 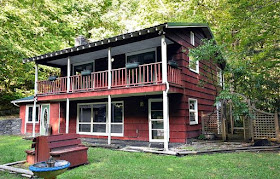 We removed all the wires, cleaned and scrubbed and scrubbed some more.  Installed new doors, porch posts, gutters, and had the old concrete porch removed and replaced it with a blue stone porch. 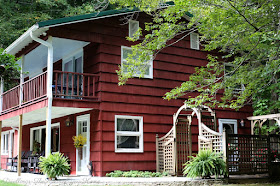 BEFORE:
That isn't a reflection on the windows...it is dirt! 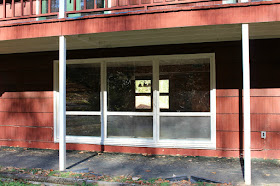 This is after the blackish carpeting had been removed.  The original porch ended at the porch posts.  We extended it so the porch would be longer and wider. 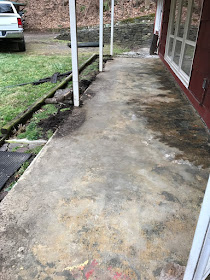 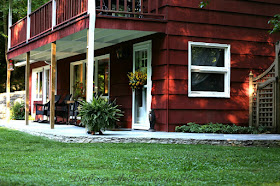 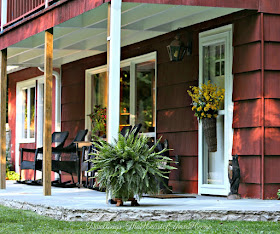 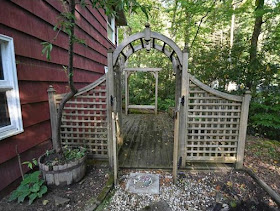 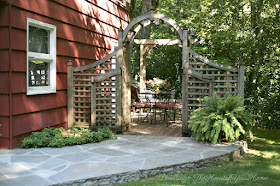 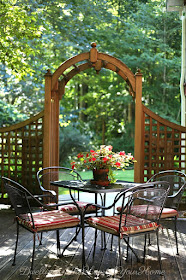 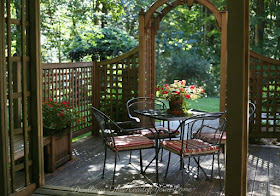 There was an old bridge across the front creek that was in bad shape and had a board across it so no one would use it.   The bridge was right in the middle of the creek which blocked much of the view from the cabin, especially from the upper porch.  When making plans for the new bridge, we decided to relocate it to an area that wouldn't block the view.

Besides all the "garden art" there stuff everywhere!  By the creek there was lamp light on a tall wooden pole, it was leaning and had no power to it. There were five or so raised beds in front of the creek with tall growing grasses planted inside...all of which blocked the view of the creek. All but one of the beds were removed and it looks much neater now and the view is much better.  You can see the old bridge just past the tallest grass in the far raised bed.  The property also had a lot of dead trees and shrubbery that needed to be removed. 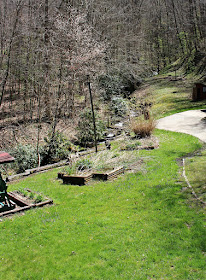 In this picture we had already cleaned up the property in the far area past the outhouse and had cut the tall grasses in the beds, but the old bridge and raised beds were still there. 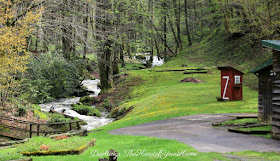 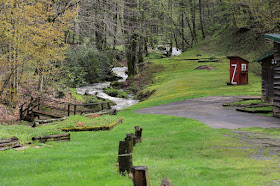 The old bridge is further up and in the middle of the creek view from the cabin so the new bridge was moved back so that all the creek could be seen.  All but one of the raised beds and all the "garden art" have been removed and the new bridge has been installed.  After this picture, the old bridge was also taken out.  We left this raised bed because in the summer, when the bee balm is in bloom, the property is swarming with butterflies...it's about the most beautiful thing I've ever seen!  (You can see video's if you follow the link at the end of this post.) 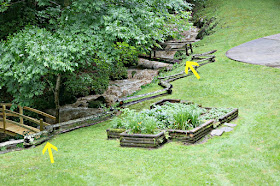 Newly installed stone steps lead down to the new bridge.  Across the creek and just to the right of the bridge there is a swing. 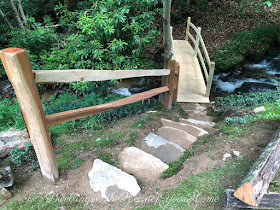 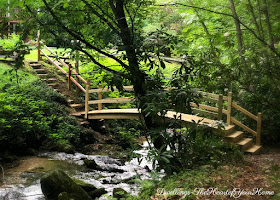 You can see a leg of the swing in this picture. 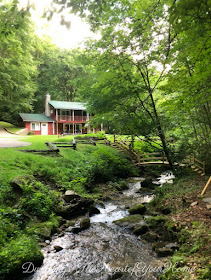 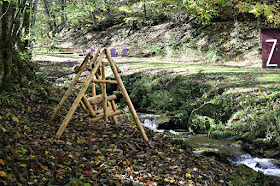 It is so relaxing and beautiful...we are so thankful. 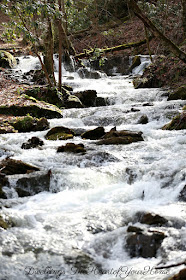 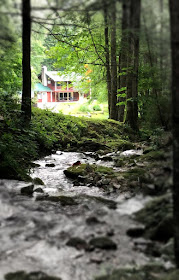 Hope you enjoyed these before and after pictures.  This is just the beginning...I'm going to show you room by room!  Go here to see where it all began and you can also see videos of the butterflies!

Come see my Instagram video where I take you on a tour inside!

Cindy @ Dwellings-The Heart of Your Home at 9:18 PM
Share

Your visits make my day and so do your sweet comments. Thank You!